The masterful frieze captures the costs of war.

General William Tecumseh Sherman made that statement during the U.S. Civil War. It seems like an understatement if you’ve lived through one. Fortunately, I have not (aside from 9/11, which, although not technically a war, certainly looked like one). My war experience has been of the passive kind, reading about it, looking at my father’s pictures from when he served in Korea in the early 1950s, visiting historic sites like Vicksburg National Military Park, and viewing the gripping and disturbing images in War Photo Limited in Dubrovnik, one of the best museums in Croatia.

One place that brings it to life better than most is the National World War I Museum and Memorial in Kansas City, Missouri. I approached the complex from the rear, from across the street at Union Station. Climbing up the staircases on a grassy knoll, I gazed up at the 217’-tall Art Deco limestone tower that bears the inscription: “In honor of those who served in the World War in defense of liberty and our country.” At the top of the cylindrical tower, four 40’-tall stylized figures with different faces and headwear but the same muscled forearms, swords, and square toes are the Guardian Spirits, each named for a different virtue: Courage, Honor, Patriotism, and Sacrifice. An elevator ride plus 45 stairs within the tower lead up to an open-air observation deck that rewards you with a terrific view of the Kansas City skyline.

The idea for a memorial for those who had served began just two weeks after the armistice was signed in 1918. In fewer than two weeks in 1919, 83,000 people donated more than $2.5 million — an astounding sum of money. Among the 200,000 attendees at the groundbreaking in 1921, then–Vice President Calvin Coolidge was accompanied by a host of key international players from the war. The finished monument was dedicated in 1926, at a ceremony attended by President Coolidge and Queen Marie of Romania.

A field of 9,000 poppies encourages you to remember to never forget.

Since then, a number of additions have been made, including a row of plaques in 1935. Important WWI figures Lieutenant General Baron Jacques of Belgium, Admiral of the Fleet Lord Beatty of Great Britain, General Armando Diaz of Italy, Marshal Ferdinand Foch of France, and General of the Armies John Pershing of the United States — all of whom attended the initial dedication — have been memorialized here.

A strikingly beautiful Art Deco frieze at the base of the memorial was also added in 1935. Sculpted by a WWI veteran, the frieze is one of the world’s best and also one of its largest, measuring 18’ high by 148’ wide. At each end, a sword with the Stars and Stripes represents the defense of the United States. Between, groups of figures depict the progression from war to peace (although the latter didn’t last very long; 20 years later, the world was at it again, in an even more destructive and horrifying conflict). From the left, soldiers march, the Four Horsemen of the Apocalypse usher in the war (one with a crown, another just a frightening skull), a nurse leads a solider on a crutch and two others with bandages around their eyes (courtesy of that vicious mustard gas), and troops return home, with crosses in a cemetery representing those who never returned. They are all headed to the central winged Liberty figure, where they lay down their weapons and are greeted by a group welcoming them with music. All the figures to the right — people and domesticated animals — depict peace, prosperity, and abundance.

I headed around these two structures to the entrance of the museum, built under the monument decades later, so that it’s not even visible from my point of origin. Dedicated to remembering, interpreting, and understanding the Great War, the museum is one of the top history museums in the United States. In fact, it’s so good that the United States Congress designated it as America’s official museum dedicated to World War I in 2004.

As soon as I stepped into the world of the 1910s, I was forced to remember one of the world’s ghastliest wars: A glass bridge to the exhibits crosses above a field of 9,000 red poppies, each one representing 1,000 combatant deaths. I had first seen the significance of the red poppy on Remembrance Day in London in 1997, when Brits wear the flower and observe two minutes of silence to recall the war. It was a moving experience then; it was a moving experience now.

Although it’s America’s official WWI museum, the collections extend far beyond U.S. borders and provide a truly global examination of the war. The exhibits, spread over 32,000 square feet, provide a fascinating and exhaustive examination of the war in two main galleries. The first concentrates on the seedlings of the war’s origins before 1914 and everything that transpired before the entry of the United States into the conflict. The collection is rich in artifacts from all the combatant nations, like helmets and uniforms, gas masks and bombs, maps and photographs, and international propaganda posters. 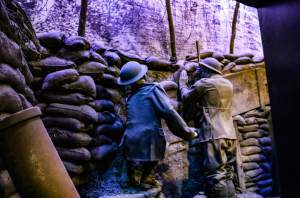 Trench warfare comes to life with sound and color.

Some of the larger exhibits include cannons, airplanes, and ambulances. A French-made tank used by the U.S. Army bears a gaping hole in its side, evidence of the German shell that struck it. A crater recreates the scene of a French farmhouse blown to bits by a howitzer shell. The infamous trenches are effectively displayed in six different scenes with real objects in place, eerie lighting that would rattle the nerves of the steeliest soldiers, and ambient sounds like explosions and confused orders to shatter almost all of your senses.

Submarine warfare gets its due, with a giant map of the British Isles surrounded by dozens and dozens of little red sinking-ship icons littering the English Channel, Irish Sea, and North Atlantic Ocean, each one indicating a vessel sunk by a German U-boat. And a chronology of the war takes you year by year in a long series of panels of photographs, silent movies, documents, artifacts, and first-person passages from individuals involved in the events described, neatly laying out how and why countries went to war and the chaos that ensued.

After absorbing all that, I took a seat in the Kemper Horizon Theater to watch a film that explained the events that led to the United States entering the war in 1917. Below me, a sunken display replicating a “no man’s land” takes on the colors and sounds of war as a British patrol crosses a devastated landscape.

From the theater, I entered the second gallery, which addresses everything after the United States became an active participant in the war, right through the 1918 armistice and the 1919 Paris Peace Conference, which, ultimately, set the stage for World War II. The exhibits here are not solely concentrated on the battlefields; home fronts are well represented, too, explaining how entire societies mobilized and how what was happening in Belgium and France, for instance, was affecting daily life in San Francisco or Canada.

I made my way upstairs, into Exhibit Hall, one of the two external buildings of the museum complex, which served as the main gallery of the museum until 1994. Flags from the 22 Allied nations that participated in the war hang from the walls, in the order in which each entered the conflict, including those I hadn’t realized were involved: Cuba, for instance, and Liberia. I stepped outside and crossed the terrace to the other building, Memory Hall, which houses bronze tablets listing the 441 Kansas Citians who died in the war as well as one of the museum’s most treasured pieces: a portion of the Panthéon de la Guerre, a massive French painting that depicts the Allied nations. Completed in 1918, the circular panorama measured 402’ in circumference and 45’ in height, filled with more than 6,000 figures. Only about 7 percent of the world’s largest painting remains here, oddly modified in the 1950s to bear a more “American friendly” representation, with certain figures added and others deleted. Despite this fairly shady blip in artistic integrity, the piece is still magnificent: sailors and soldiers, nurses and nuns, wrecked buildings and noble ideals, poppies, wreaths and crosses, the new leaders and the newly lame, all amid swirls of flag-waving patriots from different nations in traditional uniforms and garb.

I returned outside and noted the pairs of cinerary urns at the entrance to each of these two halls. A band of laurel decorates each limestone urn, with emblems acknowledging the branches of service that helped win the war: Army and Navy, Red Cross, Agriculture and Manufacturing, and Transportation.

As I made my way to the end of the terrace, I contemplated if anything good had come out of World War I. Aside from this museum itself, I was hard pressed to find anything worthwhile, especially after having just learned and re-learned about millions of lives ended and shattered; economic devastation; the beginning of the Spanish flu; the introduction of technologies on a large-scale military use that made this war so astoundingly vicious, from tanks and machine guns to chemical weapons and even barbed wire; a vastly reshaped map of Europe that set the globe up for World War II, and of the Middle East that is still causing turmoil today; beautiful architecture blown to bits; starvation; and the dramatic rise of fascism, communism, and xenophobia.

But, there were a few bright spots, as the museum also explains. Four stifling European monarchies came to an abrupt end; women entered the workforce en masse for the first time; and young and lower-class members of societies demanded a say in rebuilding their countries, now that the upper classes had lost much of their standing, not to mention their money and other assets. The Geneva Convention is especially noteworthy: a global agreement to restrict the use of chemical and biological agents in warfare that is still in effect today (although shamefully ignored in a few countries in the very recent past). Yet, what a horrible price to pay.

The world’s largest painting is an homage to the Allied forces in their victory.

Walking to the end of the terrace to begin my return back to the Jefferson House Bed and Breakfast where I was staying, I found perhaps the saddest parts of the complex. Two unseeing stone Assyrian sphinxes rest above the museum entrance, with their heads covered. “Memory,” facing east, hides its eyes from the horrors of the European battlefields. “Future,” facing west, also hides its eyes, shielding them from the unknown ahead. If “Future” had known what was just around the bend and that it would be repeating “Memory” very shortly, I think they might have done more than just hide their eyes.