A sculpted female figure functioning as a column or pillar and supporting a structure — a caryatid — dates from the time of ancient Greece, the earliest of which were found in Delphi in the sixth century BC. Her male counterpart, an atlantid, showed up a little later but bore the same burden. Since then, their usage has expanded far beyond just holding up a temple entablature. You can find them supporting a fireplace mantle, for instance, or functioning as the legs of a table. But the most impressive embellish the facades of buildings. All you have to do is look up (and, in one case, down). These are my favorites. 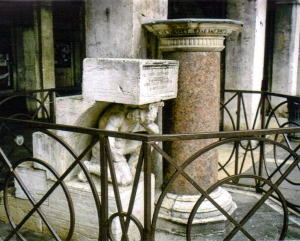 My favorite isn’t the largest or the most attractive, isn’t attached to a building, and is easily overlooked because it’s so small. But it has the best story. After I battled my way across the overcrowded Rialto Bridge, I continued walking along the street, past the shops spilling out of the arcade on my left, selling everything from tourist tat to pasta. Suddenly, on my right, the small Campo di San Giacometto opened up. The Church of San Giacomo di Rialto from the 12th century (although it was founded in 421, making it Venice’s oldest church) occupies one side; arcades frame the other two sides. At the base of one of the arcade piers, I found an iron railing surrounding a small, flat-topped pillar about four feet high next to the even smaller Hunchback of the Rialto. This little granite statue of a kneeling man is wedged into the underside of a five-step staircase, supporting it on his back and angled head, and he doesn’t look particularly comfortable. Il Gobbo has been crouching here since 1541, when this campo was the city’s business center. An official of the Republic of Venice would climb the stairs and then hop onto the adjacent column (looted from Acre in present-day Israel during the Crusades) to announce both new decrees to the public as well as the arrival and departure of important ships. He would also read out the names of those who had committed minor offenses. Burdened by all this, the little hunchback also provided great joy and hope for the condemned wrongdoers. The guilty parties would be stripped naked and then made to run the gauntlet through the city from the Piazza San Marco to il Gobbo, which he would kiss. If he completed the nearly half-mile condign challenge within a fixed time, he would be exculpated and avoid imprisonment.

Part of Stockholm’s famed Grand Hôtel since 1889, Bolinder Palace began life in 1877 as a luxurious apartment building with high-end shops on the ground floor. With its waterfront setting across the bay from the Royal Palace, Bolinder was designed as a late Renaissance palace of four floors plus an attic. With its rounded corner towers and unmistakable green awnings, the light-gray stucco façade is awash with statues and sculptures from top to bottom. Surrounding the central balconies on the two middle floors, four female figures represent architecture, art, literature, and music, and allegorical male busts of Africa, America, Asia, and Europe fill small round niches. Seated figures fill the spandrels above the French doors, and more busts are found in the towers, as are cherubs between the ocular windows. Up top, at the attic level, four bare-breasted caryatids stand above a balustrade and divide the window spaces. And below, at the ground floor, atlantids support the corner towers. At the main entrance, two atlantids on each side of the main entrance in mirror image, two clean-shaven and two fully bearded, support the brackets of the balcony with their heads and hands. Combined, all of this gorgeous decorative statuary was one of the attributes that prompted the City Museum in Stockholm to acknowledge the property as having “extremely high cultural-historical values.”

Finland’s best-known art museum houses an impressive collection of mostly Finnish art, including the world’s best depiction of an angel, along with 650 international works of art, including the first van Gogh painting to be part of a museum collection. It’s all contained in Ateneum’s gorgeous building, anchoring the south side of an expansive square and just steps from the Central Railway Station. Statues and reliefs adorn the façade of this handsome structure, completed in 1887. Busts of the architect Bramante, painter Raphael, and sculptor Phidias are set above the main entrance; 16 medallion-style reliefs in between the second-floor windows represent some of Finland’s most well-known creative types from a century ago; and the pediment bears a sculptural grouping of the Goddess of Art blessing the products of different art forms, symbolized by a palette, architectural tools, and pottery, among others. Four beautiful concrete caryatids function as columns on the sides of the arched window on the top floor, with Corinthian capitals sprouting out of their heads. Although their faces and hairstyles are the same, their gowns are different, and each one holds a different object symbolizing a classical art form: a classic Greek temple for architecture, a bust for sculpture, a palette for painting, and a hexagram on a book cover for geometry. The wide-open square in front the building allows maximum viewing pleasure of these treasures.

What goes around comes around, but at Ohranan House, the middle part is a little dark. Completed in 1889, the beautiful six-story neo-Renaissance building was originally an apartment block for Helsinki’s well-to-do. With its multitude of windows, corner tower, balconies, and double cornice, it was an enviable address indeed. That didn’t last very long, however: The Russian state bought it in 1904, and, soon after, it housed officers of the Russian army as well as the Finnish branch of the Russian secret police Ohrana. After Lenin abolished Ohrana in 1917, the newly independent Finnish state became the owner, ushering in decades of use by the Department of Defense, the General Staff, and the Border Guard. After a period of disuse, a luxury residential developer purchased it in 2012, and, once again, Ohranan is a lavish apartment building, re-christened Grand Residence 21, a far cry from its abandoned years when locals referred to it as “dead corner.” Owner-residents — corporate executives, investors, and heirs — enjoy solid wood floors, natural stone, Finnish-made furniture, sauna areas with bathtubs, 70 original and refurbished tile stoves, such concierge services as cleaning, laundry, and car maintenance, and an automated underground parking system in what used to be the auditorium — drivers pull up onto a platform and then send it by elevator to the desired floor of the parking lot. Although the interior must be magnificent, the façade is pretty impressive, too, especially the quartet of atlantids on the third floor supporting a balcony for a fourth-floor apartment. The brackets of the balcony rest on the shoulders of each of them, but two of them use additional support with their left hand, two with their right. Their free hands pull at their hair, perhaps in their struggle to hold up the structure, perhaps in their historical embarrassment as a home to Ohrana.

No expansive grounds. No guarded gates. It’s simply there — a splendid palace right along the sidewalk of one of Warsaw’s grandest streets, Krakowskie Przedmieście. Completed in 1792 as a home for the Tyszkiewicz family, the palace is still regarded as one of the most beautiful neoclassical buildings in the city. Ownership changed hands in 1840 to the Potocki family and remained so until sometime after World War I, when it became the home of a bank and, later, the Polish Academy of Literature. That was all wiped out in 1944 when Warsaw was being decimated and the palace burned down. Rebuilt after World War II, it’s now a museum of Warsaw University. By far, the most arresting feature can be found at the only entrance on the long western façade. Four elegant stone atlantids, from 1787, support a central balcony on their necks and trapezii. Nearly identical, the four look down, perhaps admiring their own abdominals. With hands resting on their lats, they could almost be poising for a bodybuilding competition. They’d probably win, too, but they are, in fact, carrying a lot of weight and history on their overdeveloped shoulders.