Escaping to nature is easy in Croatia, whether it be to a secluded beach on the Adriatic Sea or the spectacular Plitvice Lakes National Park. But it’s just as easy to immerse yourself in its urban centers, with their fantastic museums and wonderful restaurants serving fine Croatian red wine. This overwhelmingly Catholic country also makes churches easy to come by, inviting you in to explore their fascinating histories and treasures. These are my favorites.

#1 Cathedral of the Assumption of the Blessed Virgin Mary (Zagrebačka katedrala, Zagreb)

The tallest building in Croatia is neither of the usual suspects for most countries today — an office tower or a hotel. Rather, it’s the Cathedral of the Assumption of the Blessed Virgin Mary, originally dedicated to the Hungarian king St. Stephen and now more handily referred to as Zagreb Cathedral. One of the highlights in Zagreb’s Upper Town, Croatia’s largest house of worship was built in the mid-1200s. Throughout the centuries, it survived fires and Ottoman attacks, but it was the devastating earthquake in 1880 that almost put an end to it. An expansion project and repairs took a quarter century to complete, but in 1906 the cathedral emerged with its current neo-Gothic appearance and two spires that top out at 354’ and can be seen from countless spots throughout the city. An earthquake in 2020, however, toppled one tower and necessitated the removal of the other, both to be restored, so the cathedral is a little shorter and stubbier now. Statues greeted me at the frilly arched doorway at the entrance. Inside, I admired some more finely sculpted statues, elaborate chandeliers, a baroque marble altar, a 13th-century cycle of frescoes, an ivory plenarium, and a baroque reliquary-bust of King Saint Stephen. There’s also the very rare inscription of the Ten Commandments in 12th-century Glagolitic script, the oldest known Slavic alphabet and unique to Croatia that could baffle even the most learned linguist. 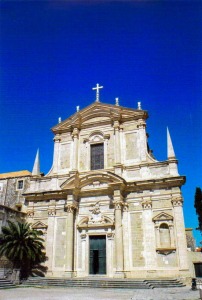 A musician in traditional garb playing a guitar attracted my attention. He was performing at the base of a monumental baroque flight of stairs from 1738. The Jesuit Stairs are Dubrovnik’s answer to Rome’s contemporary Spanish Steps (indeed, they were designed by a Roman architect). And, like Rome, these steps lead up to a church. Apparently, the stairs are daunting enough to dissuade many people from making the climb, because when I arrived at the grand Jesuit Church of St. Ignatius of Loyola, I had it almost entirely to myself. Designed by a Jesuit monk-architect and completed in 1725, this magnificent church provides a wonderful backdrop to the open-air performances during the Dubrovnik Summer Festival in the square it faces. The church features a shallow entry staircase, a pair of empty niches, Corinthian columns and pilasters, a sculptural angel above the portal, and heightened pyramidical decorative elements. The belfry houses the oldest bell in the city, from 1355. Inside, I walked under the barrel-vaulted ceiling, along the single-nave church and then the side chapels. The semicircular apse, the highlight of the church, explodes in vibrant colors with its large frescoes depicting scenes from the life of St. Ignatius, including the central one that features the saint holding the Book of Rules of the Society of Jesus and flanked by four women who represent the four continents where the Jesuits had established missions and universities. 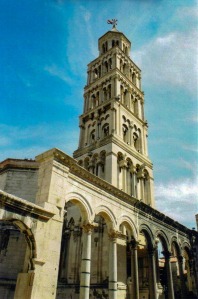 When Roman Emperor Diocletian retired in the early fourth century after a 20-year reign, he chose to spend the rest of his days near a favorite childhood spot along the Adriatic Sea and built a palace in Split. Half palace for his personal use and half military garrison, today this tremendous structure composes the heart of central Split. Chock full of churches, temples, shops, restaurants, byzantine mazes, towers, arches, columns, gates, small courts, and town walls, the entire complex occupies more than 320,000 square feet and houses about 3,000 residents in its apartments. At its heart rises the magnificent Cathedral of St. Domnius, built in 305 as a mausoleum and shrine to Diocletian. In a poetic touch of irony, when Christian refugees converted it to a church in the seventh century, they dedicated it to St. Domnius, one of many Christians martyred during Diocletian’s persecution campaign. I was completely enthralled before I even entered, stopped in my tracks by one of the world’s top five doors. More than two dozen scenes from the life of Jesus carved in wooden relief adorn the two 17’-tall doors. A different intricate pattern of interwoven tracery frames each scene, and each one of those is separated from the others by highly detailed acanthus and grape vines, with small human and animal figures detectable in the leaves. Dating from 1214, the doors are remarkably well-preserved and remain the finest Romanesque sculptures in Croatia. Inside this limestone and marble cathedral, history passes before your eyes: the plain dome from more than a millennium ago, the 13th-century pulpit, the high altar from 1427, and the 15th-century canopied Gothic altar. Make sure to climb the 179 steps to the top of the Romanesque-Gothic bell tower, added centuries after the original building and greatly altered in 1908, for gorgeous views of the city, Marjan Hill, and the Adriatic Sea.

This cathedral’s roots go way back, quite literally: It was built on the foundations of a Romanesque structure that was destroyed in an earthquake (and that had been funded by Richard I, the Lionheart, the English king who was saved from a shipwreck on the nearby island of Lokrum) and that itself had been built atop the ruins of a Byzantine church. The present church, a big baroque structure dating from 1713, presents a façade with a broad and gentle staircase, Corinthian columns and pilasters, and deep niches with statues of St. Blaise (the city’s patron saint) and Joseph with the child Jesus. Above, statues of saints stand atop a balustrade on either side of a window with a large triangular gable. The sides are fairly plain, with pillars, smaller entrances than those at the front, and semicircular windows. It’s those windows, as well as those at the upper level, that provide a lighter and brighter interior than I expected from the heavy outside. Two side aisles with large columns flank the high nave, and a grand dome rises above the intersection of the nave and the transepts. Among its multiple altars, I stopped at St. John’s violet marble altar and the collection of coral jewelry offered by seamen and their families at the Our Lady of the Port altar. The main altar holds Assumption of the Virgin, a polyptych by Titian from 1552. The cathedral’s rich treasury comprises important church vessels, paintings, a 13th-century Romanesque-Byzantine icon of the Madonna and Child, and nearly 200 gold and silver reliquaries containing revered relics, including a piece of the True Cross and the gold-plated arm, leg, and skull of St. Blaise.

Opposite the Cathedral of the Assumption of the Virgin Mary, the Church of St. Blaise honors the city’s patron saint, who saved Dubrovnik in the 10th century from Venetians who had anchored their ships nearby. Freely roaming the city under the guise of stocking up on supplies before heading east, the Venetians were secretly making notes on how to attack Dubrovnik. One night, a parish priest went into a local church and found, incredibly, a heavenly army led by a grizzled old man, with a bishop’s mitre and a staff, who identified himself as Vlaho (or, in English, Blaise) and revealed to the priest the Venetians’ true intentions. The priest relayed the message to the city leaders, who promptly prepped the city, dampening the plans of the Venetians, who hoisted anchor and left. The next year, in 972, Dubrovnik began its still-extant celebration of the Feast of St. Blaise, the man who saved the city in 971 — but who had actually died in 316. As if Blaise’s miraculous appearance wasn’t enough, he defied logic again when, following a fire that completely devastated the prior church, burning and melting everything in it, only one item survived unscathed: a silver statue of St. Blaise. Rebuilt in 1715, this church puts Blaise front and center on the building’s façade, standing atop the arched gable over a semicircular stained-glass window and holding a model of the city. To his one side, a statue personifies Faith; to the other, Hope. I climbed the short flight of stairs leading to the portal, decorated with angel statues, and entered the baroque interior. The square nave with a barrel-vaulted ceiling leads to a square sanctuary and the apse flanked by sacristies. Central Corinthian columns support the dome and lantern. The white and polychrome marble altar holds a niche in which stands the miraculous silver statue. After exiting the church, I sat on the steps next to the balustrade and considered the individual balusters next to me. Most of them were darkened with age, pockmarked with holes from the senseless shelling the city endured during the siege of 1991 when Yugoslavia was imploding. The top part of one of them, however, was brand new, bright, clean, and smooth — a rebirth of sorts. In its way, it reminded me of how Faith, Hope, and St. Blaise are still watching out for this unique city.