The skyline of Cincinnati, Ohio, rose ahead of me, across the Ohio River from my vantage point behind Newport Aquarium (one of the world’s top five aquariums) in Newport, Kentucky. It was familiar to me, having been a fan of the four-season sitcom WKRP in Cincinnati, thanks to its opening montage of scenes of the city. Now I wanted to see it for myself, so I headed over the John A. Roebling Suspension Bridge and began to explore some of the city’s notable architectural achievements. These are my favorites. 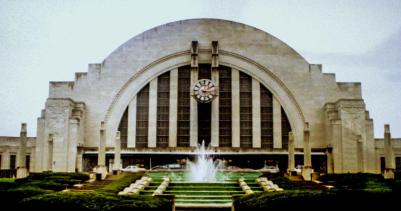 Almost doomed right from when it first opened its doors, Union Terminal has emerged as one of Cincinnati’s iconic buildings, and with many good reasons, the first of which is immediately apparent as soon as you see it: It’s the largest manmade half dome in the Western Hemisphere, a 10-story structure standing 106 feet high and 180 feet wide. Completed in 1933 as a passenger railroad station built in the finest Art Deco design of the time for seven different rail lines, it opened just as rail travel was peaking, and, soon after, began its rapid demise. By 1972, the year the terminal closed, only two daily trains were stopping at the station that once handled 216 per day. Abandoned, then redeveloped as a short-lived mall, and abandoned once again, the terminal was spared from the wrecking ball in the 1980s, when plans to reinvent it as a museum center were finalized. I had come here to visit the Cincinnati Museum Center, which comprises a children’s museum, a museum of natural history and science, an OMNIMAX theater, a history library and archives, and the Cincinnati History Museum, which includes a replica of an 1850s steamboat and the largest full-motion urban layout in the United States — fantastic scale models of the city in the 1940s, from the tallest edifices to the smallest fire hydrants, complete with running trains and streetcars, and building lights and streetlamps that turn on as night falls over the scene and fade as a new day dawns on a continuous loop of sunrise–sunset.

As soon as I stepped inside, however, I knew that the building was an attraction in and of itself, and I quickly signed up for a tour. We passed under an enormous American flag into the main concourse and walked by the arch that reads “Outgoing Taxis & Motor Coaches” in a classic Art Deco font and that led to the tunnel that used to funnel passengers to their transportation. My eyes were immediately drawn upward, to the bands of yellow and orange around the arch and encircling the rotunda, and to the two massive mosaic murals curving around the rotunda. Each mural — an astounding 22 feet high and 110 feet long — portrays the city’s history with images of covered wagons, locomotives, and steamships, farmers and factory workers, all in rich, vibrant colors. From here, the tour brought me up to the mezzanine level, with its bird’s-eye view of the main concourse, and then deep into the building to the streamlined offices for the railroad executives — think men in three-piece suits, female secretaries in stylish clothing, buzzing intercoms, leather furniture, and lots of cigarette smoke. In 2014, the National Trust for Historic Preservation named Union Terminal one of the 11 most endangered historic places in the United States. Now, however, after a recent $228 million renovation, hopefully that ignominious distinction will never again be applied here.

Miraculously, the four corners at the intersection of Plum Street and Eighth Street West in downtown Cincinnati boast three of the city’s five most beautiful buildings. Of these, City Hall is the largest and most impressive, and it was its nine-story clock tower that drew me here from a few blocks away in the first place. The best example of Richardsonian Romanesque architecture in Cincinnati, City Hall was dedicated in 1893 in a celebration that included a parade, speeches, music, and fireworks. It was listed on the National Register of Historic Places in 1972, thanks to its beautiful exterior of massive stones, rounded arches, steep mansard roof, the hallmark clock tower, and shorter round towers. Very little extraneous ornamentation clutters the façade, save for one or two grotesques and some floral stone carvings; the use of the stone itself, in stripes and checkerboard patterns, gives it its character. An equally impressive interior greeted me when I stepped inside and started admiring the marble stairways and wainscoting, the white granite columns, and the dozens of stained-glass windows, lunettes, and skylights, some of which bring Cincinnati’s early history to life. Look for intricate and often-missed details, like the doorknobs that display the city’s Latin slogan, old letter boxes with eagles emblazoned on them, ceiling murals, and the statue of Cincinnatus, the Roman patrician, statesman, and military leader who lent his name to this city. Constructed for a cost of just over $1.6 million, this was definitely money well spent. 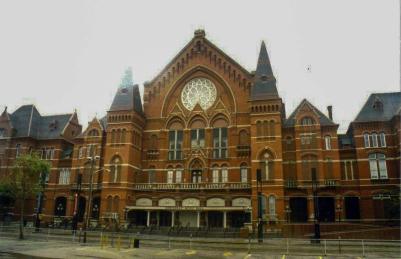 North of downtown Cincinnati, the massive Cincinnati Music Hall occupies the entire block across the street from Washington Park. This Victorian Gothic Revival pile from 1878 (designed by Samuel Hannaford, the same architect who created City Hall) became a National Historic Landmark in 1975 and remains one of the city’s most recognizable buildings. Now home to the Cincinnati Ballet, the Cincinnati Opera (the second-oldest opera company in the United States), the Cincinnati Symphony Orchestra (the sixth-oldest in the United States), and the May Festival (the longest-running choral festival in the Western Hemisphere), the Music Hall started life as a dual purpose destination — both music hall and convention center. Composed of three buildings constructed separately but linked in perfect harmony, it originally showcased musical events in the central auditorium (everything from classical music to, later on, the likes of Frank Sinatra and Prince) and other types of exhibitions in its side wings — industrial exhibitions, wrestling matches, horticultural shows, political events, and circuses, to name a few. Built on the grounds of an old pauper’s cemetery (earning it a reputation as one of the most haunted places in the United States), this tremendous red-brick structure with a small dose of black pressed bricks features a steeply pitched gable roof with striped shingle tiles, dormer windows, a large rose window, and two central towers flanking a broad entrance with five doors approached by a gentle staircase. The central building features carved sandstone ornamentation, like a French horn, to indicate its purpose as a music hall, while the side wings sport flowers, birds, and scientific tools to reflect their vastly varied usage. If you have the chance to go inside, be sure to check out the grand Springer Auditorium, which can seat more than 2,000 people and is lit with a 1,500-lb. Czechoslovakian-made chandelier, and the Music Hall Ballroom, the city’s second-largest meeting space.

Across the street from City Hall stands the historic Isaac M. Wise Temple, formerly called the Plum Street Temple. This gorgeous structure was designed by a local architect who looked very far abroad for his inspiration: the Alhambra in Granada, Spain. Constructed mostly during the Civil War, the temple was dedicated in 1866, placed on the National Register of Historic Places in 1972, and designated a National Historic Landmark in 1975. I was quite taken with its exotic look, an amalgamation of various styles that combine to form a rather unusual structure for a Midwestern American city. Overall, the temple is identified as Byzantine-Moorish in style, a nod to the golden age of Jews in Spain. But the rose window and three arched entrances employ Gothic architecture, the crowning minarets clearly suggest Islamic architecture, the motifs used to decorate the entrances, rose window, and the Torah ark are all Moorish, and the written texts surrounding the interior space are in Hebrew. Inside, you’ll be dazzled by an abundant use of color, lots of columns and pointed arches, the wonderful organ case, the beautiful abstract designs on the ceiling, and the sheer number of original items: the floors, pews, pulpit furnishings, and organ as well as the gaslight chandeliers and candelabra (although now rewired for electricity). You’ll also be impressed by its history: It’s one of the oldest synagogue buildings in the United States, is one of only two Byzantine-Moorish synagogues in the United States (the other stands in New York), and is where the first female rabbi ordained by a rabbinical seminary (who, incidentally, was also the second ordained female rabbi in Jewish history) was ordained, in 1972.

All I had to do to visit another of Cincinnati’s most beautiful buildings was to step across the street from Isaac M. Wise Temple. The eye-catching, almost oversized white limestone steeple of St. Peter in Chains Cathedral soars 224 feet above street level and contains 13 bells. Tiered like a wedding cake, one layer contains a ring of crosses around the entire steeple; another has a band of Corinthian columns. The whole thing is topped by a plain spire, capped by a simple cross. I climbed the stairs to the extremely tall bronze door, protected under a portico supported by a dozen ribbed Corinthian columns that stand 33 feet tall, symbolizing Jesus’ age at the time of His death. The Greek revival structure, dedicated to St. Peter’s imprisonment and liberation, has been gracing downtown Cincinnati since it was completed in 1845 as the second oldest permanent cathedral in the United States, the first large church west of the Allegheny Mountains, and the tallest structure in the city. Inside, rows of ornate Corinthian columns with gold capitals led my eyes up to the deeply coffered ceiling. The Greek theme is continued in the stylized Stations of the Cross, which would look just as appropriate on the sides of an ancient Greek amphora. Of course, the most striking element of the cathedral is actually the first thing you’ll notice upon entering: the massive mosaic at the altar. With tiles imported from Munich, Germany, the mosaic — the largest in the United States when it was completed — features Christ seated in His glory, with one hand raised in blessing and the other passing the keys of the Church to an undersized Peter. On the lower left, Peter is imprisoned in chains in Jerusalem; on the lower right, he is imprisoned once again, this time in Rome.