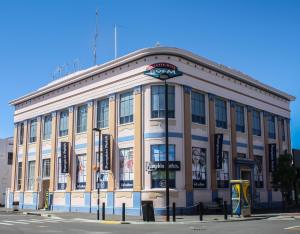 Snuggled along the coast of Hawke’s Bay on New Zealand’s North Island, the small city of Napier owes its current fame to an earthquake that destroyed it. On February 3, 1931, a massive 7.8 earthquake leveled most of the city, killing 258 people in the temblor and the ensuing fires. With its citizens eager to rebuild their city as quickly as possible, construction projects sprouted up all over town in the next few years. Art Deco happened to be the architectural style of choice at that time, and, as there were so many simultaneous projects, the city achieved a uniformity rarely seen in urban environments. Today, after Miami, it’s the best city in the world to appreciate Art Deco architecture and style. Read more about Napier’s best buildings >

I am a writer and editor with 25 years of experience in my field and 45 years of travel adventures.

One thought on “Art Deco Delights in Napier, New Zealand”